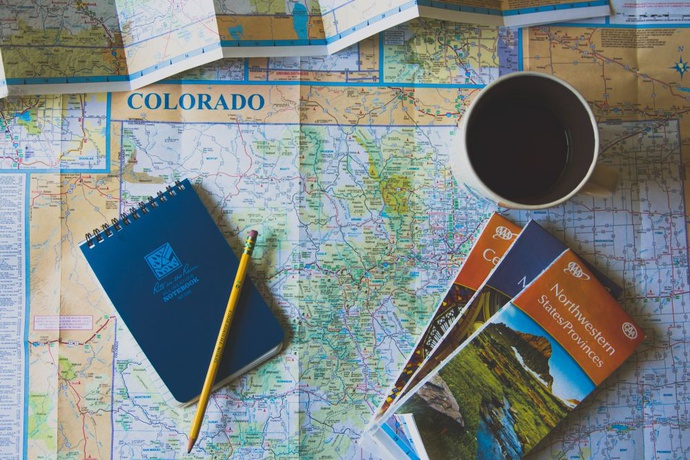 Regular blog readers will know that we recently spent some time in New York, hosted by Democracy Works. While we were in town, we talked to Maria Bianchi and Chris Shea about GetToThePolls.com. Get To The Polls is a polling station finder which forms part of the Voting Information Project (a partnership between Google and Pew Charitable Trust). Democracy Works handle the process of collecting and collating data about polling places and voting precincts from local government organisations so that it can be made available via Google’s Civic Information API and Get To The Polls.

As you would imagine, there are substantial similarities with our own Where Do I Vote project. As well as the nature of the data we work with, our approaches are also quite similar. Both organisations publish open data via an API for use by downstream consumers as well as presenting that information on our own showcase website. We had a lot to talk about and enjoyed trading war stories as well as talking about the similarities and differences between the two projects.

There are some areas where our projects are very different. For example, I’ve written before about some of the techniques we use to ensure our sites scale and perform on polling day. Get To The Polls is a static site which consumes the Google Civic Information API. This means most of these scaling problems are handled by Google - nice work if you can get it!

There are however some areas where our projects are quite similar and there were several useful things we were able to learn from them.

One of the main overheads of Where Do I Vote is the process of collecting data from local authorities, performing consistency checks on the data and chasing up issues with our partners in electoral services teams. We’ve done some work on automating these checks but I am still a bottleneck in this process. The process is time-consuming for us and often results in quite a long feedback loop for our data partners.

Democracy Works have many of the same problems to solve, but they have a different approach. The Voting Information project publishes an open specification for the data consumed by their projects. In order to submit data to Get To The Polls, data partners at the state level must produce data which conforms to the specification. Democracy Works then provide a self-serve upload tool which allows data partners to check their data against the specification and flag possible errors in the data. This means their users in local government get feedback on data quality more quickly without having to wait for a manual turnaround and it ensures that the data Democracy Works receive will meet certain minimum quality standards. For those interested in more details, the source for this project is on GitHub.

Democracy Works also provide two tools which allow their partners in local government to check their uploaded data. Data partners can preview the station locations they have uploaded as points on a map and also upload a file of addresses with expected polling station results to check that the returned results are correct. This helps their local government partners to have confidence in the process.

We probably won’t go down the route of producing a specification that local authorities must conform to (as I’ve written previously, accepting the data which is easiest for councils to produce is important for us), but we’ll definitely be looking at a more automated process to make it easier for councils to provide us with high quality data in future.

In our Where Do I Vote user feedback report, we wrote about the overhead of receiving bug reports via the feedback form. We already plan to introduce a dedicated form for reporting problems, but Democracy Works were able to offer some useful advice on how to tackle this problem. On the Voting Information Project’s “report a problem” form, they ask the user to fit their bug report into one of a number of pre-defined categories and they have found that this helps them to deal with problems more efficiently as some of the necessary triage is done as part of the reporting process. This is particularly useful on polling day where it is important to address any issues as quickly as possible. 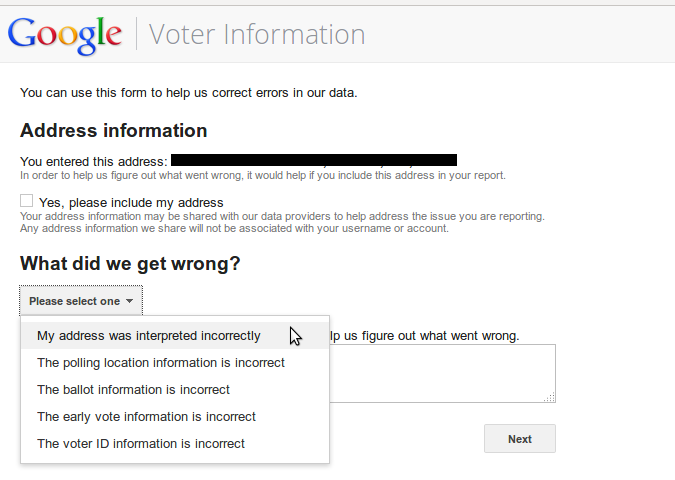 ‘Report a Problem’ form on GetToThePolls.com

The Voting Information Project also encourages partner organisations who are consuming the data via the Civic Information API to implement the form on their sites so that they are able to receive problem reports from downstream data consumers. Again, we’ll definitely be taking these suggestions on board when we improve our error reporting process before the local elections in May next year.

We were also able to share some of our experiences from Where Do I Vote with Democracy Works. Currently, they only accept voting precinct data in the form of a list of registered addresses, but they will need to be able to accept voting precincts described as GIS boundaries in future. We were able to provide some advice on some of the issues they might need to handle to accept data in this format.

Some of the findings from our user feedback report may also be helpful for them. For example, we found that presenting the opening times for polling stations in a very obvious way was the most common request from users of our site. This information is a bit more difficult to collect and represent in a straightforward way on Get To The Polls because not all polling places have the same opening hours and their users may be in one of four time zones. Looks like we have it easy.

There’s lots of food for thought here. Our thanks to Chris and Maria for taking the time to share their experiences with us. Hopefully we were also able to offer some useful advice.