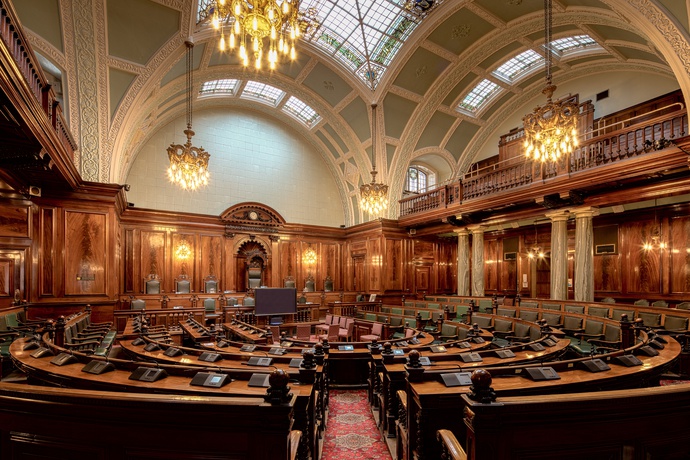 This is a nice room. Shame we don’t know who sits in it

The idea is to spend a week learning about what’s involved, writing some code, talking to partners and working out if there’s a sustainable model for running something in the long term.

Here’s some questions we want to answer. We’ll try to write answers to all of these in the FridayBlog.

1. Is it useful for us to do anything?

We’re not the first people to do this. There are commercial databases out there, and there is the excellent OpenCouncillorData. mySociety are looking in to this as part of their democratic commons.

We don’t want to start our own thing just for the sake of it, so we need to work out how best to help each other. Step one of this was to start talking to as many people as we could find. That turned into a #Councillors room in our Slack and we’re meeting up in person on Wednesday.

There are a lot of types of elected representatives in the UK, from Westminster MPs through to parish councillors. What should we try to cover? MPs are accounted for because Parliament publishes good data on them already. For our candidates crowdsourcing we cover councils, as well as Welsh and Northern Ireland Assemblies, Scottish Parliament, Police & Crime Commissioners, Combined Authority/Regional Mayors, Directly elected District mayors and the Greater London Authority. This seems like a good list for us to aim for, but we don’t know what problems / challenges exist for each. It’s reasonable to assume that councillors are the hardest because they represent the largest number of people over the most organisations.

What might this even involve? Here’s what we (think we) know:

Here’s some things we don’t know a lot about yet:

We suspect there are some groups who might want to help chip in to maintaining the data:

There will be a lot more questions over the week, I’m sure. We’ll try to have answers to some of them by Friday, and an idea of what (if anything) we plan to do next. As ever, get in touch if you’re interested in chatting about any of this!