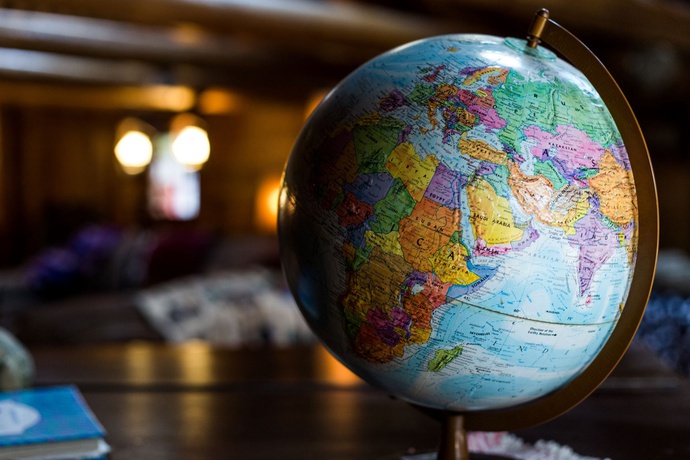 During 2019, our candidate and polling station finders at WhoCanIVoteFor.co.uk (WCIVF) and WhereDoIVote.co.uk (WDIV) received almost six million visitors. Unsurprisingly, this traffic was extremely varied, while our partnerships with social media companies meant that virtually every UK social media user would have seen a prompt for WhereDoIVote.co.uk during the election campaigns.

However, when recently pulling together visitor numbers from Google Analytics for our annual report, we noticed one dimension we had not previously considered: international users. Across the whole of 2019, 2.5% of WhereDoIVote.co.uk visitors and a whopping 8.4% of WhoCanIVoteFor.co.uk visitors arrived from a non-UK IP address. This equates to around 120,000 in the first instance and 124,500 in the second, hardly insignificant numbers!

Furthermore, these users’ level of engagement with our websites (known as the ‘bounce rate’) was, at between 40% and 50%, largely comparable with that of our UK audience. This suggests that a good proportion of them were not on our websites by mistake, but were interested in what we had to offer.

In what follows, we make a rudimentary attempt to understand who these users are, and put forward some educated guesses to explain what they were looking for.

According to Google Analytics, the top ten non-UK visitors to WCIVF in 2019 were as follows:

Ignoring the USA’s disproportionate (even for its size) numbers for a moment, this list is largely unsurprising, and can be explained, we think, by British citizens abroad. All of these countries have strong links with the UK, and are popular destinations for UK immigrants and holidaymakers (this is also indicated by other countries high on the list, such as New Zealand, Hong Kong and the UAE). This is matched by anecdotal evidence: our email and website feedback suggest that Britons abroad are often quite diligent in hunting down information on their candidates. For example, 52% of the traffic from France was received via an online search engine (as opposed to a referral from Facebook, etc), compared to 45% for UK visitors, suggesting a more proactive approach to seeking out election information.

And the American visitors? A closer look reveals that 79% of these hail from Illinois, a state which provides only 4% of the entire US population. In fact, we’re more popular in Illinois than Northern Ireland, which is a bit awkward. If we strip out that state, US numbers drop to 14,305, or 0.95% of the total. Still comfortably at number one (and comparable with WDIV, where Illinois provides a more believable 3% of total US visitors), but more in line with the other nations. Either UK elections are remarkably popular among Illinoisans or - perhaps more likely - there’s something up with our Search Engine Optimisation. Answers on a postcard, please.

Interestingly, this international traffic does not exactly mirror UK traffic. Figure 1 compares WCIVF’s UK visitors with its top ten non-UK countries (minus Illinois!) over April-December 2019. Although the peaks of both datasets correspond with 2019’s elections - the May local and European elections, and the November-December general election campaign - there is one major difference: non-UK visitors were far more likely to visit our website in the week immediately after nomination day (when we learn who the final candidates are - 14 November for the general election) than UK visitors. This, we think, reflects the fact that these visitors are disproportionately postal voters, looking for information to help them complete their ballot papers in time to send back to the UK.

If our assumption is correct, then WCIVF is a more important tool for overseas British voters than we had previously assumed. This makes sense: these voters have far less access to traditional sources of election information than voters in the UK. In future elections, we may wish to add more information for postal voters on our websites, and maybe even consider partnering with websites which serve British communities in other countries.

Migrant voters in the UK: WhereDoIVote.co.uk

According to Google Analytics, the top ten non-UK visitors to WDIV in 2019 were as follows:

Why are international visitors coming to WhereDoIVote.co.uk at all? Knowing the location of a UK polling station does not, on the face of things, appear to be of much use to an internet user in the USA. We think the answer is not so easily explained by British citizens abroad, because Commonwealth countries (except India) are much lower in the rankings compared with WCIVF.

Instead, we think this list reflects the connections between immigrants in the UK and their friends and family back home. A French student, for example, finding themselves with a vote in the local elections, mentions this to their family back in France. Maybe they send their family a link to WDIV over Facebook, or perhaps their family are motivated to do some research themselves. This scenario is little more than an educated guess, but one which we believe is supported by the data.

The strongest evidence is provided by the inclusion of Romania at number four, strikingly up from the forty-eighth place it holds in the WCIVF rankings. Since restrictions on free movement for Romanians were relaxed in 2014, the Romanian population of the UK has rapidly expanded to become the second most common non-UK nationality. These new arrivals are obviously unfamiliar with UK elections, and are probably more likely to discuss them with friends and family back home, thus pushing up traffic to our website.

This picture is further supported when we consider elections individually. For example, Romanians are unique in that their most popular day for a visit to WDIV was not 12 December (the general election), but 2 May, polling day for the 2019 local elections. On this day Romania contributed a remarkable 0.35% of all our site visitors, knocking the USA from the number two spot. Why? Presumably, this is because EU nationals cannot vote in British parliamentary elections - visitors from Poland demonstrated a similar, though less marked, trend. American or Dutch visitors, meanwhile, were overwhelmingly focused on 12 December, reflecting those countries’ longer and deeper ties with the UK - members of these communities are probably more likely than Romanians or Poles to have a vote for parliament.

(Why Saudi Arabia on 12 December? This looks like a curious error on Twitter’s part: judging by Analytics, thousands of Saudi and Qatari users accidentally received Twitter’s general election prompt, which linked to WDIV. Unsurprisingly, over 95% of these visitors immediately left the site without interacting!)

What’s our takeaway from this? If we’re correct, and international visitors reflect the priorities of immigrant groups in the UK, it shows that we are helping to meet an important user need. Our polling station finder is designed to help those who have a genuine, urgent requirement for basic electoral information, a description which fits migrant groups particularly well (more than one group working with migrants used our finder during the 2019 general election, for example).

In the weeks following the UK general election, traffic on WCIVF remained steady, at between 1,000 and 1,500 hits a day. Then, between 6 and 8 February, we experienced a spike of over 10,000 visitors, the vast majority of whom were from the UK. Why? It seemed unlikely they were all here for the 6 February Warrington council by-election. What else was on that weekend? The Irish general election, of course. Unsurprisingly, visitors to WCIVF from Ireland more than doubled over this period.

If people in the UK looking for information on the Irish general election accidentally ended up on our websites, then might voters in other countries also do the same? The answer, it seems, is yes. In February and March 2020, five countries with English as a major language held elections: The Irish GE on 8 February; local elections in Delhi on the same day; a general election in Guyana on 2 March; American presidential primaries clustered on 3, 10 and 17 March; and local government elections in Queensland, Australia, on 28 March. Figure 2 shows the top five non-UK countries for visitors to WDIV over February and March 2020. As you can see, the peaks map exactly onto the elections mentioned above. Interestingly, elections in non-English speaking countries do not seem to register at all: 23 February state elections in Hamburg netted us precisely zero German visitors on that day.