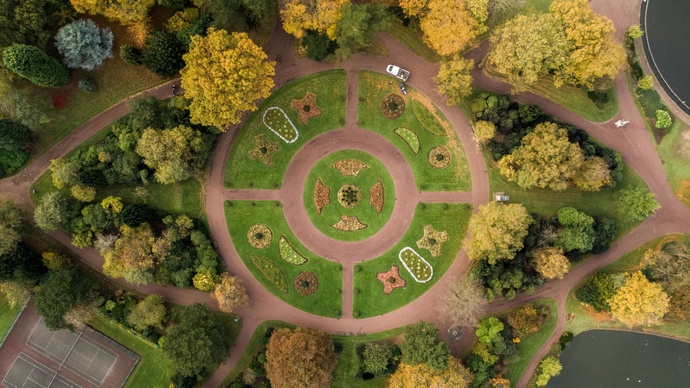 6.95% of this park’s visitors used our polling station finder in December. Maybe.

Where are the users of our services? Who are they? Today, we attempt to understand where the postcode searches we receive actually come from. Hopefully most of the graphs we present speak for themselves: regardless, we’ve tried to keep the commentary to a minimum. Questions and comments welcome!

We’ve been hesitant to try and answer this question in the past. As Sym observed last week, everything to 2020 was supposed to be a practise run: digging around in our user data could become an unnecessary distraction from getting things to actually work.

However, following the local, European, and general elections of 2019, we have been left with a relatively robust database of postcode search requests. Separating these down to council and constituency level allows us to perform some simple analysis, giving us an idea of where (and possibly who) our users are.

The data used in this analysis represents postcode searches received by Democracy Club’s polling station database during the three elections of 2019. For each election, the reporting period is that of our highest traffic flow, which covers the three days before polling day and the day itself (00:00 Monday to 22:00 Thursday). This equates to 770,000 searches for the local elections; 1,200,000 for the European elections; and 3,500,000 for the general election.

Using information published by the House of Commons Library and The Electoral Commission, we are able to show the number of postcode searches by local authority or parliamentary constituency as a proportion of each area’s electorate.

This data only reflects areas which actually had elections. This means that our local elections data does not represent every single user of our services in the run up to 2 May (we had 1.3 million UK searches , but only 770,000 were for areas in England with an election). We have also excluded data relating to Northern Ireland, as Elections Office NI runs its own polling station finder which we link to. However, we have included NI data for the general election in our Flourish map, below, for completeness.

Please see the note at the end of this post for other omissions in our data.

Table 1 gives a summary of our polling station searches for the English regions, Scotland and Wales, for each 2019 election, as a proportion of each region’s electorate.

*Please treat Scotland’s EU numbers with caution, as they do not include Glasgow or North Lanarkshire. See note at end of post.

What is immediately apparent is that there is little relationship between the number of postcode searches and voter turnout. The difference in postcode searches between the constituencies with the lowest turnout (Hull East) and highest (East Dunbartonshire) was a mere 1.56%. This, at least, suggests that we are not catering disproportionately to the more politically engaged.

The constituency with the highest proportion of searches was the Cities of London and Westminster; the lowest was North Norfolk. Whether or not our polling station finder was able to provide answers for a given constituency does not seem to have made a difference to the number of postcode searches during the general election: somewhat embarrassingly, we were able to deliver a polling station location for voters in North Norfolk, but not for those in the City of Westminster (although we did have data for the much smaller City of London). With traffic to our polling station finder pouring in from across the internet, individual efforts to boost searches (by geographically-focused council electoral services teams, for example) are virtually impossible to discern. We return to this subject in our discussion of the local and European elections, below.

Plotted using Flourish’s excellent parliamentary constituency hex map, we can see that our general election searches are concentrated in urban areas, even when accounting for population size (the darker the colour, the higher the proportion of searches):

You can search for an individual constituency using the tool in the top left corner. If you’re using a mobile device, you’ll need to touch and hold a constituency for a second to view its data.

The urban focus makes sense, for a host of reasons. Urban populations are more mobile, and urban polling stations are (probably) more likely to change between elections. Crucially, urban centres are younger. North Norfolk, which produced our lowest per capita postcode searches, also happens to have the oldest median age of any English or Welsh constituency. Meanwhile, university towns and cities such as Cambridge, Oxford, Bath and Canterbury all have a high number of searches.

The younger the constituency, the higher the number of postcode searches. Considering that young people are less likely to vote than older people, this trend suggests we are on the right track to meet the needs of this underrepresented group.

One final general election chart. We are pleased to say that we are not disproportionately serving less deprived regions of the UK:

The Local and European Elections

The May local and European elections offer a very different context from the general election. Compared with the December vote, these elections had a much lower level of public interest, indicated by the low overall turnout (32.8% and 37.2% respectively). However, for our purposes, this means that these elections provide usefully comparable data. Furthermore, because our services were not swamped in the way they were during the general election, we are able to more easily observe the effect council interventions may have had.

The vertical axis represents the number of polling station searches as a proportion of each constituency’s electorate, and the horizontal axis represents turnout. The pink points reflect councils for whom we were able to provide a polling station result, while the blue points reflect councils who did not provide us with this data. We have labelled every council which gave us over 5% postcode searches, and provided separate trend-lines for ‘had data’ (pink) and ‘did not have data’ (blue).

What is immediately obvious is that young urban areas do not hold quite the same dominance here as they did in the general election. Indeed, during the local elections, areas such as Leeds and Manchester - which would go on to score highly in December - each barely scraped 3% postcode searches. Instead, the top areas in these two elections are a relatively eclectic mix of rural and urban, young and old. Of particular note, neither of the top areas by searches in the local and EU elections - respectively Runnymede (8.54%) and Dorset (12.09%) are predominantly urban or young. Dorset, in fact, has one of the highest median ages in the entire UK.

What appears to have set these outliers apart was the proactive steps taken by the councils’ electoral services teams to encourage their residents to use Democracy Club’s services. Both Runnymede and Dorset promoted WhereDoIVote.co.uk and WhoCanIVoteFor.co.uk in emails, press releases and on their election webpages (this was especially important for Dorset, a new council with a strong interest in providing information to residents). The trendlines for councils with and councils without data further reinforce this point, as councils who had sent us data were more likely to promote our tools. Similarly, Reading’s high score in the EU elections is a reflection of the fact that council efforts to promote the site during the local elections continued to push people towards our services, despite the fact that we did not have data for them on 23rd May (not the fault of the council itself, we should say!).

These findings are encouraging. It reinforces our view that councils are pivotal organisations when it comes to encouraging takeup of voter information tools, and that even relatively minor interventions (such a link clearly posted on a council website) can have a considerable impact if used effectively. Moreover, it points once again to our well-worn argument: that voter information will only achieve its greatest reach when delivered by the state.

Our local elections data omits Bedford. At time of writing, this council has not confirmed their overall electorate or turnout for these elections; they did provide us with polling station data, and had 3652 searches before and during 2 May.

Due to problems with our reporting, our EU elections dataset omits City of Glasgow and North Lanarkshire. Neither of these councils provided us with polling station data.

Democracy Club postcode search data (all searches per local authority or parliamentary constituency for each election).

Local elections data by The Electoral Commission (under the “May Elections” subheading).

EU election data by the House of Commons Library.

General election data by the House of Commons Library.

Median age of English and Welsh parliamentary constituencies by the Office for National Statistics.

Deprivation ranks of English Constituencies by the House of Commons Library.