Update: On 22 February the Government announced that six councils will not be holding elections, pending consultations on proposals for unitary local governments. The six councils would have had 252 seats up for election, which means the 6 May scheduled elections in England are now 4,648 seats in 3,864 wards, across 144 councils.

The six councils are:

Whether or not the 2021 elections are held on 6 May or are postponed for a few more weeks, the general consensus is that these will be some of the most complex polls ever held in the UK. The number of different organisations involved and electoral systems used across England, Scotland, and Wales is unprecedented.

In the interests of clarity, here’s a roundup of what to expect in May.

So, what’s up for election?

Meanwhile, the following elections were already scheduled for 2021:

In England alone, we’ve counted 4,900 council seats up for election on 6 May, spread across 4,116 wards and divisions, in 150 councils (including the five Parishes of the Scilly Isles).

Across the whole of Britain, a grand total of 5,166 representatives are scheduled to be elected, on 4,310 separate ballots. Here’s a map shaded by the number of seats up in each area (ward-level): 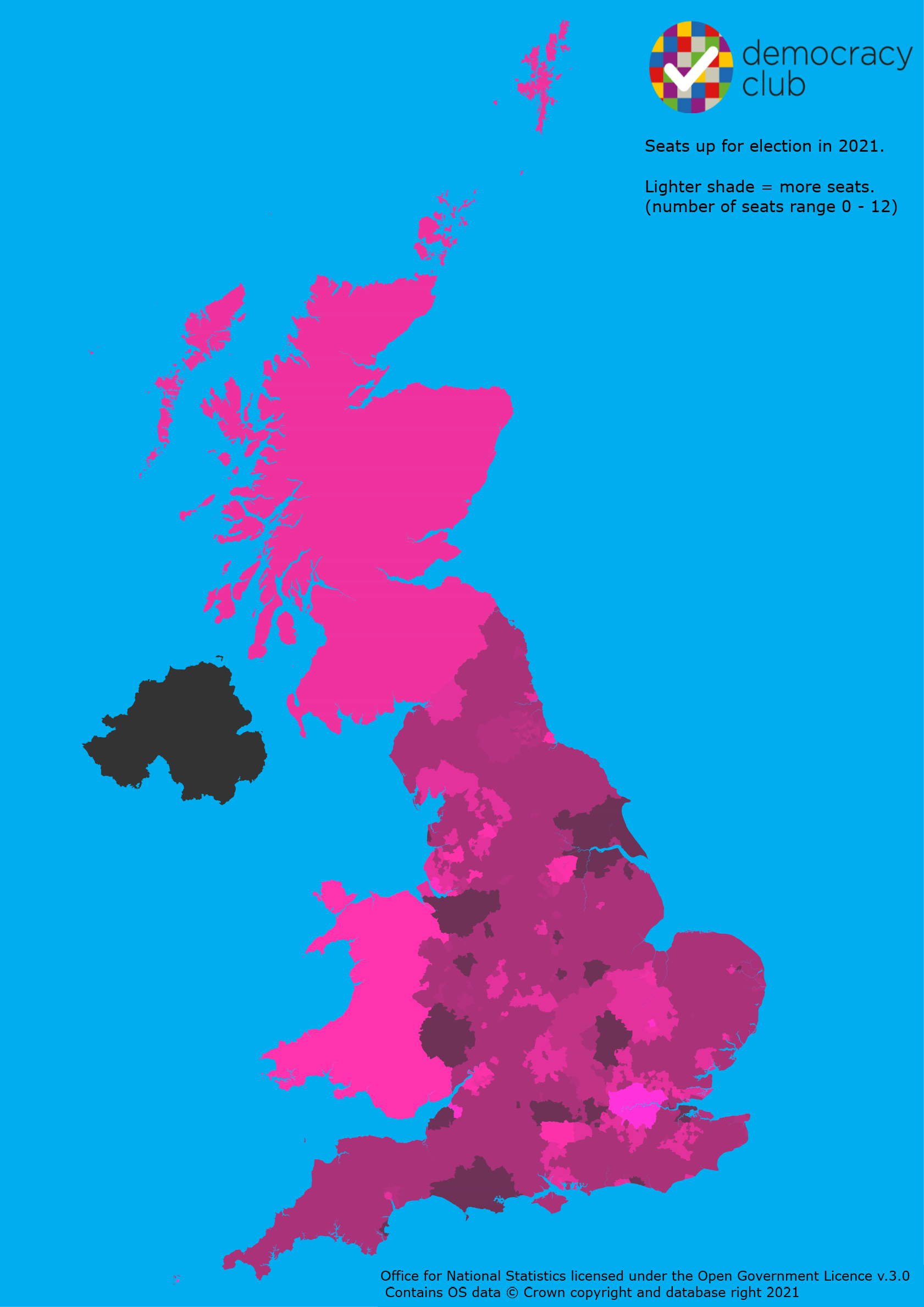 Election 2021: seats up for election in each ward. Lighter colours = more seats. Scale of zero (Northern Ireland) to twelve (Isles of Scilly).

With so many combined polls, the number of ballot papers voters will have to deal with will be formidable. Everyone in Scotland will receive two ballot papers. Everyone in Wales will receive three. Matters are especially complex in Wales, where two different franchises will be operating: while 16 and 17 year olds and foreign nationals can vote for the Senedd, they do not qualify to vote for Police and Crime Commissioners (PCCs).

In England, ninety-six councils will elect a third of their councillors; six councils will elect half, and the remaining forty-eight will elect the entire council. Only 24 council areas will hold PCC elections alone; excluding a few wards across the ‘third up’ Unitary Authorities, voters elsewhere in England will receive between two and four ballots (not including any parish elections they may also have!)

Where will have the most elections? By our calculations, voters in three council areas will be guaranteed four ballot papers each: Bristol and Liverpool will elect the council, the Mayor, the Metro Mayor, and the PCC in one go, while Cambridge will hold District, County, Combined Authority and PCC elections. In the case of Bristol, this means voters will have anything up to nine crosses to mark across two different electoral systems.

And some people still question the need for an online candidate finder!

See a list of all 6 May elections on Democracy Club Candidates. 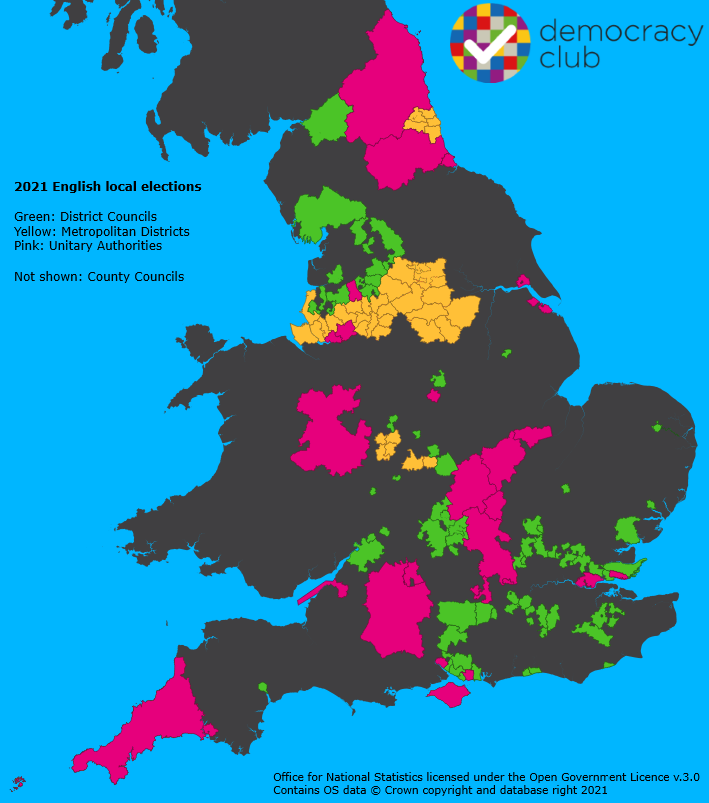 Other polls on 6 May

In addition to the above, many voters will also be handed ballots for parish elections and local referendums.

This year will provide a bumper crop of town and parish council elections - we don’t cover these as standard on WhoCanIVoteFor.co.uk, but are planning to announce an experimental project on them shortly!

There are also at least three governance referendums planned for 6 May: Sheffield will decide on whether to keep its council cabinet, while Newham and Tower Hamlets will hold votes on their existing elected mayors.

Finally, 6 May will also witness the largest number of council by-elections (probably) ever held on a single day. This is because councils in England have been forbidden from holding by-elections since March 2020 - a situation entirely unprecedented in modern British history (by-elections went ahead even during the two world wars). Scottish and Welsh councils are able to hold by-elections before 6 May - we’re expecting at least 24 of these over the next couple of months (by-elections are extremely unusual in Northern Ireland).

The veritable fountain of data that is Andrew Teale has been tracking council vacancies. He’s counted 287 empty seats across England - the result of a year’s worth of resignations, deaths, or disqualifications. This means that over 1.5% of all English council seats are empty (an alternative though very similar figure of 296 vacancies is given by Open Council Data UK).

Of these empty seats, 107 are already due for election in 2021. That leaves at least 175 by-elections to be held on 6 May, with three months still to go.

With these elections set to occur against the backdrop of a global pandemic, stretching the resources of administrators and seriously limiting political parties’ ability to campaign, Democracy Club’s services are needed now more than ever.

Want to take part and ensure electoral information reaches those who need it most? Here are actions you can take now to help out:

If you think you can help out or partner with us in some other way, please don’t hesitate to drop us an email.