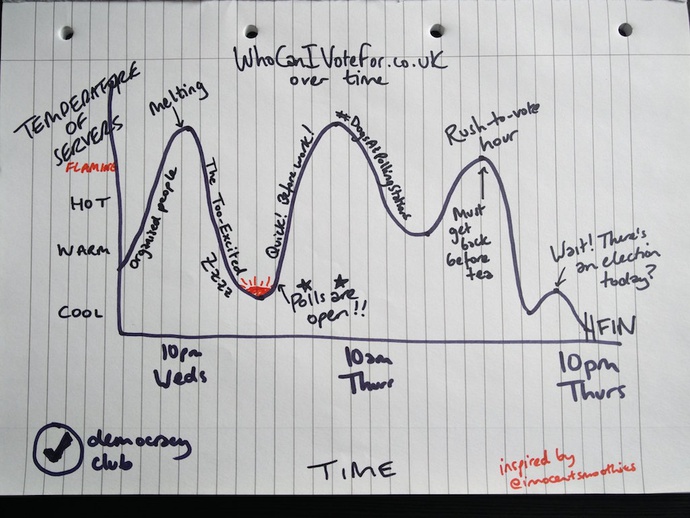 Exclusive analysis from the election period

A largely sleep-deprived Democracy Club blogpost this Friday, looking at local results, feedback from users, and making plans for the next five weeks.

Our friends at LGIU have been working hard to track results from the local elections. They are plotting control of councils on this page with a nifty DemoClub-powered map. We’ve just set up the ability to record ward-level results data again — we tried this last year but only got about halfway…we’ll see if we can do better this time.

We have flip-flopped on results a bit. Arguments against trying to crowdsource open results data are:
(i) our current focus is on the stuff that happens before the vote, and
(ii) there are plenty of better resourced organisations that cover results, such as…all the news media.

Arguments in favour? Well, there’s still no official, open results data anywhere. Both voters and people who build things for voters are looking for this data. Some councils are definitely publishing this in better formats now — more HTML less PDF, but as someone who wants to know who won, I still have to know where on the web to find that page, and which ward I’m in. Users keep coming back to WhoCanIVoteFor, trying their postcode and then leaving feedback that says they were looking for results. It would be fantastic to close that ‘feedback loop’ of an election by sending everyone news of the result and details of their new representative. Lastly, and importantly, we’ve some fantastic volunteers who are willing to take a chunk of the country and enter all the ward results. So here goes! Get involved here.

How did we do?

At the beginning of this year, during those cold, dark days, we set a range of targets for the local elections / the six months to July. You can read the full post here, but broadly, we wanted both to provide valuable information directly to thousands of voters, and we wanted to provide APIs that would indirectly reach many thousands more.

The first look at the stats look good, although we’re rushing this a bit so as to focus on the next election.

Here’s the vital signs in terms of polling locations, from Monday morning to Thursday night:

This looks at first sight like we’ve reached more people than we’d hoped via our partners and our own website fell short.

Of course, lots of hits doesn’t necessarily translate as ‘we helped people’ — we can look to some qual feedback for that.

What do the users say?

For yesterday’s elections, we set up a live feedback channel in our Slack (group online chat thing) to relay what people were saying in the form at the bottom of the results pages on WhoCanIVoteFor. We didn’t have time to set it up on the polling station finder – next time.

The constant stream of ‘This isn’t enough information’ was pretty devastating. We — as a society! — have to do better with local elections, as Joe argued in the Guardian this week. Happily it’s much easier to do better at the General Election, but it’s worth re-publishing some of the feedback from yesterday, indicative of the whole, here:

“Is there no way to actually find anything out about my local candidates for the council elections? Seems not!”

“I would love to have been able to read some background information about my local election candidates to get some idea about what kind of people they are, what links they have to my town etc. It has been IMPOSSIBLE to find any of this online and not a single leaflet or pamphlet was put through my door.”

“appalling that I want to vote this evening and have absolutely no information on any of the candidates, know nothing about their policies or vision for the area and therefore cannot responsibly vote. I’ve been trawling the internet - there should surely be info on the web in 2017?”

“yes [I found the website useful,] I ended up not voting as could find no information on any of the candidates and their policies on the web.”

So, depressing on one hand; an inspiring call to arms on the other. Candidates, local and national party machinery — we are going to get this information together for the GE, where we’ll see ~50x the demand. We’re coming for you.

Now we can relax a bit and prepare for next year’s set of locals as we continue to test, iterate and improve on the road to the 2020 General Election.

There are 34 days to until the 2017 General Election. We’ve got to find and verify all the candidates next week. Crucially, given the feedback above we need to build a richer picture of the candidates — ideally getting every candidate to write a ‘statement to voters’, as well as capturing their election leaflets and party manifestos. And we’ll have our work cut out trying to get the polling station finder working for as many people as possible.

Yikes. We’ll need your help. Join the mailing list or get in touch for a Slack invite if you can help. Give money if you can’t give time.

Forward! (After a bit of a rest this weekend).