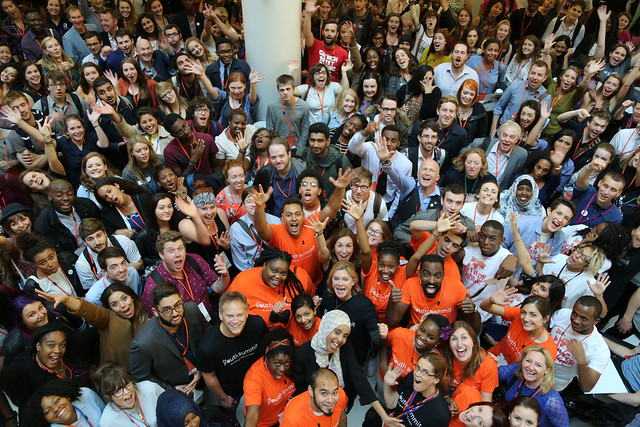 Last June, with colleagues at London First, we did a quick sprint looking at approaches to helping more young people to vote in the EU Referendum.

We were lucky to have some budget to get a researcher, Alex Blandford, in to analyse the state of play and look for insights into what might work. As well as reviewing academic research, Alex spoke with several organisations involved in this field: Bite the Ballot, the Electoral Commission, British Youth Council, The Democratic Society, Association of Electoral Administrators and Full Fact.

We’re finally getting around to publishing the report in three blogposts: the problem, current solutions, and recommendations for the future.

Today’s post focuses on the problem — the effects of policy and social structures, and young people’s attitudes and feelings towards politics and voting. It starts with pointing out, rightfully, the problem of who-we’re-actually-talking about…

Alex takes up the story.

The problem with attempting to study the reasons for non-voting/non-registration in young people is that there is no defining characteristic of the young except their age. While generalisations can be made about the ways in which they consume media and technological nous, there are fewer shared characteristics than looking at a more defined group such as “bakers aged between 30-40 in the Birmingham area”.

This problem of selection has had an impact on the academic literature on the topic, with studies tending to rely on re-interpretation of existing large-scale sociological questionnaires. This has significant limitations as it relies heavily on the survey design of the initial exercise being appropriate for the later questions that are asked of the data. It also suffers from a selection bias, in that people who voluntarily fill out surveys may not be the best group to extrapolate from when assessing the reasons for low voter registration/turnout numbers.

Since the timescale for this project was one week and the number of people in the target audience was high and their needs are so diverse, it made sense to try and create a synthesis of understanding from academic papers and practitioners within the civic society sector who work on projects involving young people.

Another issue both with the academic research on the subject and the people working on projects is the constitution of the group “young people”. Many initiatives focus on recent or upcoming school leavers, or young people in halls of residence in higher education. However, few research or involvement projects are aimed at young people in work, houses of multiple occupancy (HMOs/flatshares), NEETs (not in education, employment or training), people still living at their parents’ home or any combination of the above. This accounts for the vast majority of people aged 18-24 (the range commonly used to define ‘youth’ with regard to electoral registration) and they are currently underserved by drives for registration or broader political participation.

What gets in the way of young people taking part in elections?

A repeatedly raised issue was the difference between the old system of a whole house canvass versus IER, which relies on each person to fill out the form on their own. This makes the task harder in houses of multiple occupancy as it means that instead of one fastidious member of the household potentially registering everyone, each person has to complete a form. This also has an impact for young people living at home who may have previously been registered via the household canvass.

Voter registration drives for the May local/mayoral elections hit a lot of students while they were in their university address, and while they can register an out-of-term address, they are likely to be registered to their university address for the referendum.
For young people in general short tenancies are not uncommon, with some people moving annually. This also has a negative effect on registration and turnout.

Feeling of distance to party politics.

Most respondents we interviewed suggested that young people were, broadly speaking, interested in politics. This was usually separated out between “big-p” and “little-p” with “big-p” politics representing the party system. This boils down to the idea that while people might be interested in a particular issue (e.g. air pollution in London or the housing shortage), there is a big problem then mapping that interest onto the offer from a particular political party.

Feeling of not being listened to.

This is the problem of the gap between voting and any effect. All our respondents talked about the issue of encouraging people to register and vote without further interaction with politics leaving bigger problems as then people felt that their vote had been ineffective. This is especially true in the case of young people as most political parties, responding to lower turnout from young people, tailor their manifestos towards the concerns of those who register and vote. Thus when there is success in registering people, they can then quickly become disenchanted by the lack of impact that one vote can have. Organisations expressed a unanimous approach to trying to instill a broader sense of democratic participation in people rather than a simple register/vote approach.

Feeling of not having enough information to make an informed choice.

Many organisations noted that a blocker to young people’s involvement is the feeling that they do not have enough data with which to make an informed decision. This is related to the above problems — the information that is provided can feel remote and partisan, written for a high reading age and aimed at those who are already voting, tending towards older people.

Around all of this is the problem that voters are rarely looking for information unless they already have a degree of engagement in the system. Thus, information that is created on sites aimed at young people often languishes there without the targeted marketing to bring people in.

Lastly, what’s not the problem?

Not registering to vote in order to avoid council tax or governmental visibility had been brought up anecdotally in sessions before the start of this project, but was not mentioned by participants. When asked about it, it was noted that on specific occasions where there was an advertised comparison between the electoral roll and the council tax list, people had taken themselves off the electoral roll, but that this was rare and a specific set of circumstances.

Tomorrow we’ll look at the approaches that have been taken to increase registration and voting among young people — and what we know about what works.