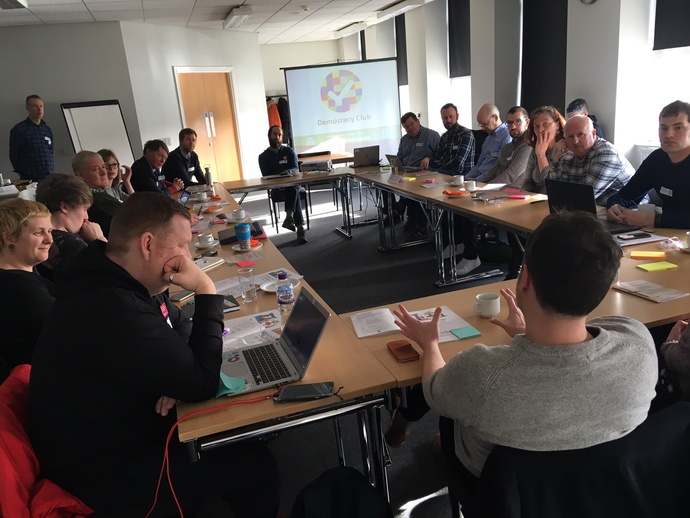 We’re in ☀️ Huddersfield for the local democracy conference known as #NotWestminster. And your usual Fridayblog updates!

🚆 We’re not in Westminster anymore 🚆

We’re only rarely in Westminster, to be honest. But once a year we’re in Huddersfield for the excellent #NotWestminster conference. Today is the warm-up day for the main conference, where a bunch of local democracy fans come together to hack or make something useful.

We started by asking people what decisions they thought were interesting. It took two minutes to fill the flipcharts with post-its:

Big decision process being mapped here… How are Local Plans decided? Stages above the line (what you do), drivers below the line (how you do it). #notwestminster pic.twitter.com/o8Min72L69

The Local Plan group are also talking about what information is (and isn't) published at each stage of the process. #notwestminster pic.twitter.com/cFE2R6YgBI

There are some absolutely terrific acronyms in the Local Plan group. SHAHs, SHAMs, it’s TLC heaven.

The Libraries group are talking about which parts of the decision-making process are (and aren't) visible to the public. #notwestminster pic.twitter.com/14i7herV3q

The idea is to think about how open these processes are — and how much citizens could pro-actively or reactively learn about the decision-making — and get involved, if they wish.

Later in the day, once the groups had mapped out the decision-making process, they worked on ways to make it better. Or at least more open. Hopefully.

There’s too much to summarise for Fridayblog, but there are oodles of tweets to look at via the #NotWestminster hashtag.

We’re also running a side hustle, asking some more classic Democracy Club questions: how do we make good hustings? What else can we do for better voter engagement at elections? And we’re inviting people to try out Candidate Crowdsourcing (TM) if they’ve not used it before.

Happy #NotWestminster everyone! Welcome to the democracy club tent! pic.twitter.com/eMQ0fM74rZ

Instantly, someone suspiciously close to Westminster got in touch:

would be a great start if we actually had hustings. None last election in my constituency.. .once we have them, can worry about quality..

So we added to the posters:

Added a new flip chart! Someone agrees with you, will try to talk to local govt people to see what they think… pic.twitter.com/i590oPh8UM

We had a good chat about hustings (etymology included — its from Old Norse! Fascinating! But probably needs changing) — and realised that what ‘good’ looks like depends on what you’re maximising for — attendance, quality of debate, culture of good-natured but critical debate, etc.

You can see our lightly structured thoughts on hustings here.

On the ‘increasing voter engagement’ poster — we’ve been inspired to think big by meeting Cat Smith MP this week, who is seeking ideas that could feed the next Labour Party manifesto. We’ve done the Democracy Club standard thing and put a Google Doc draft together. Do add to it!

Yesterday we had 14 by-elections across the UK — and next Thursday there are another 12! It’s election madness. We’ve got all the details and you can find your local candidates at Who Can I Vote For?

No by-election near you? Share it with any friends or family who are in that part of the world!

It’s sprint planning day on Monday — lots to get done as May moves ever closer. Check out our current sprint and what’s still on the to-do list.