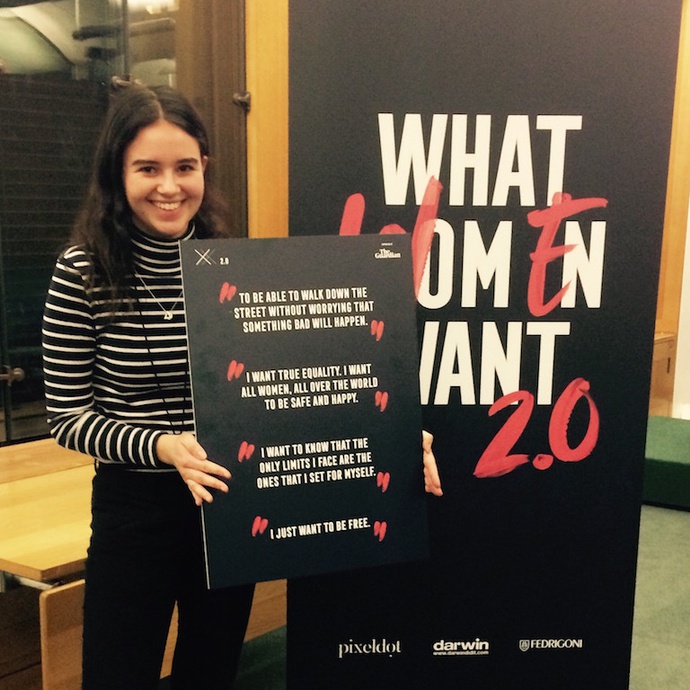 It’s International Women’s Day #IWD2018 and overall I’m feeling positive. That being said, there are also so many issues I could discuss in this blog post that relate explicitly to women that still need attention. But I’m going to keep this relevant to Democracy Club. So this blog post will be about, who would have thought it: elections! (And the lack of female representation in them). I will, however, start by recounting the event that I attended yesterday and then seamlessly segue into elections.

Yesterday evening I attended the launch of the ‘What Women Want 2.0’ report. Over 20 years ago, women in the UK were asked one simple question: ‘What do you want?’. This meant there were no prompts or survey biases, just a simple point blank question, allowing women to have their voices heard. This research led to a report called ‘Value and Visions’ which made a huge impact on the gender debate at the time in UK society. In 2016, women in the UK were asked the same exact question again. And the shocking revelation is that 20 years on, the results are not dissimilar.

Along with the answers to ‘what women want’ the report also included essays from nine inspiring and powerful women making waves in society today. The essays were on: Feminism and Intersectionality, Caring, Education, Equal Pay, Expectations, Global Peace, Pensions, Safety and Violence and Social Justice. Many of these essays centred around issues that arose from the report’s research. For example, 41% of responses noted that they wanted ‘more support for child/elderly care responsibilities’, 42% of responses noted ‘wanting equal pay’ to male colleagues and counterparts and 19% of responses noted wanting an ‘end to all gender-based violence’.

The first panel discussion of the evening came from six of the authors of the essays who all spoke with great passion. To highlight two: Dalia Ben-Galim from Gingerbread discussed the insecure and low paid nature of work that single parents have to accept and Sharmaine Lovegrove from Dialogue Books explained her mission to give underrepresented and marginalised writers a voice. After this first panel discussion and hearing the breakthroughs and blockages that fellow women have experienced, I felt the whole range of emotions: anger; hope; frustration and elation. On to the next panel….

The second panel discussion consisted of four female MPs from four different political parties. The floor was open to questions, and boy were they grilled! They were questioned on topics such as childcare support and entry into the job market, the closure of detention centres and tokenism. While their political opinions may have differed, they maintained their mutual respect for each other and all respected the work the others had done to attain their position.

When asked what they were feeling optimistic about, many answered the progress women were making in, for example, representation in parliament. At the moment, 208 MPs in the House of Commons are women, hailed as a ‘record high’. A record high it may be, but it’s not really good enough, is it, that it’s only 32%? Moreover, it’s a by-election Thursday today and out of 34 candidates standing across 8 wards, 21% of these candidates are female.

So to the crux of it — and yes I have now seamlessly segued into talking about elections, bet you hadn’t even realised! — why are there not more women MPs and councillors? It’s been asked before, it will be asked again, but it still doesn’t have an answer.

In case you don’t already know, the local elections are coming up in May. In 2005, the New Politics Network, now ‘Unlock Democracy’, released a research report trying to tackle that exact question in local politics: why are there not more women representatives? Of the female councillors that were interviewed many mentioned the burden of care, political will and the image of politics. Here are a few responses from female councillors who were interviewed:

“Conservative Member of a Devolved Chamber : “I didn’t see I’d have a career in politics at first because I was also looking after my elderly father… So there was a lot of juggling at that time… I’m finding difficulty now that I’m a member [of a devolved chamber] balancing all the things I do, but it’s always important I think to have a really broad aspect of life in the community.”

Liberal Democrat Cllr: “I think leadership’s a key issue. Local Chairs, Council Group Leaders and other people in key positions have to make it a positive mission [to get more women involved]… If you can use your leadership at that more local level to create a culture of wanting to find women to stand for council, wanting to have a woman on [the] council, going out of your way to make that happen, then that will ultimately impact on how your whole local party perceives women who go for parliamentary seats.”

Labour Cllr: “Seeing women…in the media; you see MPs etc that have been successful, or your names of local councillors (although not as much), that’s at the back of your mind and you realise that other people can do it and they’re an example to other women if they want to follow that route.””

Many of the responses shocked me, they felt very out of date, especially in their description of the role of women and the prejudice that female councillors had experienced:

“Liberal Democrat Cllr Nicola Clarke: “Some of the men, particularly the Conservative men, [make] comments about figure, legs. Just things like: ‘the Liberal Democrats know how to select a woman who’s got good legs,’ or whatever. Just comments about a woman leader being like a fishwife or that ‘she doesn’t know how to stop talking, like all women.’””

The report was written over ten years ago and I’d like to think that times have changed. But my experience from last night at the report launch taught me that maybe things haven’t changed. SO, in perhaps an ambitious ask, if you or anyone you know have wanted to stand or have stood in a local election, please get in touch! I’d love to know what barriers you may have faced. And speaking optimistically, maybe you’ve experienced no barriers at all? I want to hear about those experiences too!

To finish on a positive note, firstly I had the privilege of cornering Alison Thewliss MP last night at the ‘What Women Want 2.0’ launch. I asked her what barriers to female representation she thought still existed and how we can overcome them. To paraphrase she answered that you ‘Shouldn’t take no for an answer’ and that when she was a local councillor and a new mum she would bring her baby to the council meetings. She didn’t ask and no one told her not to, so she just went for it! And secondly, Alison replied to me on twitter.