This week has been about SoPNs, of course. Those sweet ‘Statement of Persons Nominated’ PDFs full of potential wombling points — and, er, more importantly, our ticket to building a candidates database — and thus the ability to help voters out — for the local elections this May.

In this week’s blog we’re celebrating progress, learning from the parties we threw in three cities and plugging the National Democracy Awards.

We’ve had an extraordinary week of crowdsourcing candidate data. Thank you so much to everyone who’s crunched through some PDFs, helping to make the local elections vastly more accessible.

Here’s how this week’s leaderboard (or ‘top wombles’) looks at mid-morning on Friday. It’s pretty incredible: 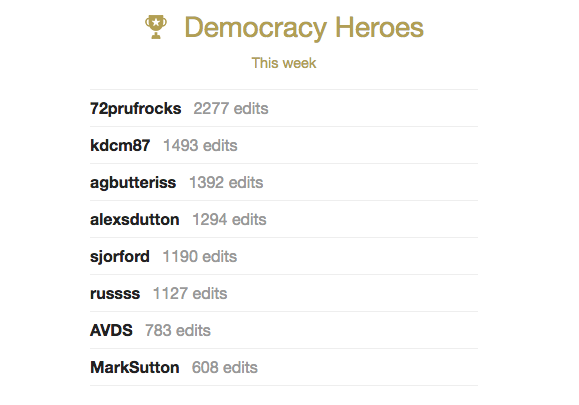 Don’t worry, we’re not expecting you to achieve the same towering heights of achievement as a 72prufrocks, kdcm87 or an agbutteriss, but we’d love you to help us finish off the rest of the papers (merely hundreds left at the time of writing), or of course, get adding more detailed information about your area.

If you’ve not got started yet, head to the homepage and get stuck in! If you have questions, the best place is our Slack, where we’re all learning from each other. It’s fun, promise! There are bad puns and everything.

🏆 And the winning #SoPNDay party is… 🏆

In order to kickstart the crowdsourcing with a bit of a bang, we hosted three election data parties on Tuesday: London, Birmingham and Manchester.

In third place… with 1,442 edits… was Team Birmingham.

[monumental awkward pause like on all those tv programmes]

…with 3,372 edits… doubly impressive because they were also watching the football… was Team Manchester.

Busy data entering, but with the football on in the background here at the Manchester #SoPNDay party pic.twitter.com/uqdpSO0s1L

The winner therefore, with a spell-binding 4,730 edits was Team London. Woot! Even though they kind of had a five-hour head start on everyone else! 🏅

As the last tressle table is packed away… a massive thankyou to everyone who attended the #SoPNDay London event. Some great democracy heroes! Thanks to @nwspk for hosting and @Shoutout_UK @citizenbeta @techforgoodtv @LGiU @ingridk @cased and more for putting in graft! pic.twitter.com/FqQI8xGwYz

Many many thanks to Newspeak House, The Federation and Impact Hub Birmingham for hosting, and to CAST, Tech for Good and Pauline Roche for spreading the word!

If you attended one of the parties, please do fill in our very quick survey and let us know what you made of it!

🎈 What we learned from SoPNDay 🎈

Democracy Club has run small-scale crowdsourcing parties before, but this was the first time we’d done multiple events at the same time, and on this scale, with perhaps around 60-70 people attending across the three cities.

Here’s some thoughts from the hosts, mainly so we remember them, but which might be useful beyond Demo Club too:

And that’s before we’ve even looked at the participant responses. More to come!

At the inaugural (we think) ‘National Democracy Week’ this July, the Cabinet Office will award some folks who’ve done great things for democracy in the UK. Ahem. They’ve asked us to remind you about the nomination process. Honestly, they did. We’re not just putting this here so that you nominate your favourite small-non-profit-that-crowdsources-data-to-make-democracy-work-better.

“The awards will recognise the individuals and organisations across the UK that are working hard to engage people in our democracy.

“Their work, particularly with under represented groups, has the potential to help people understand their democratic rights and make their voices heard.

“This service is not always recognised, but as part of this summer’s festival of democracy, we want to acknowledge the outstanding contributions that so many have made.

You can find out more about the awards and how to enter on the National Democracy Week Website.

More SoPNs! Then double-checking and locking the wards so that no rogue elements can add or remove candidates. Then adding whatever useful info we can get on the candidates — as well as hustings and manifestos. And work on the polling location finder continues.

Joe will also be at mySociety’s The Impacts of Civic Technologies Conference, or #TICTeC, next week, hoping to learn about how we can better measure the effects of what we do — and to chat with some potential partners and funders.