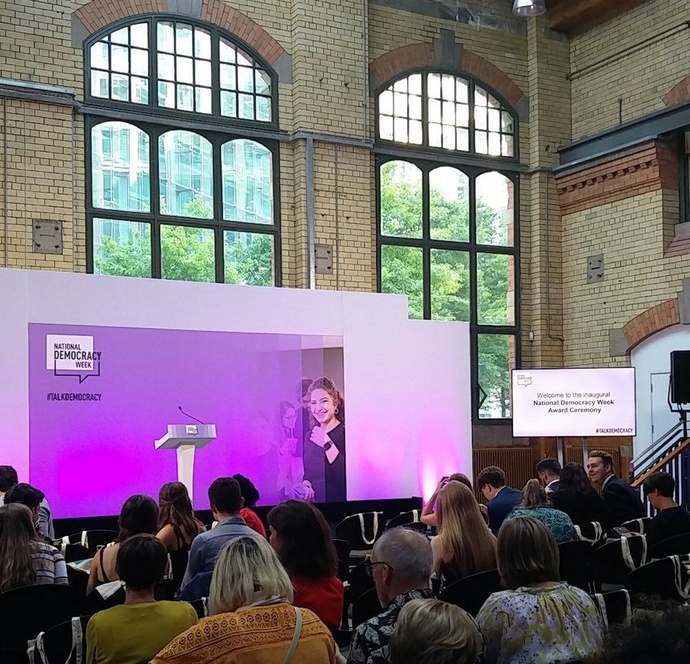 This week we celebrate the winners of the first National Democracy Awards, plot with various London-based institutions and we need your crowdsourcing help!

This Monday marked 90 years since women were granted the franchise on an equal basis to men. Celebrations of the anniversary have been taking place across the UK, such as these lovely scenes in Leicester, and the Cabinet Office designated this week as the first ‘National Democracy Week’.

As a result, we were in Manchester on Monday, as the guests of The Politics Project for the first National Democracy Awards, a nice idea to celebrate efforts to make democracy betterer. Held in the Engine Room of the People’s History Museum, the winners included:

All worth checking out! The world of organisations doing stuff for democracy is a small one, so it was great to meet so many like-minded folks cracking on with trying to make it work better. Hopefully some opportunities for collaboration in future too.

As well as Manchester, we schlepped to London a few times this week to meet the Greater London Authority and the London School of Economics.

With the GLA, we’re making an early start on the mayoral and London Assembly elections in May 2020. We plan to run the polling station finder for the entirety of the city (we got so close this year, so it should be within reach) — and we’re going to keep talking about what we can do for candidate information. We’re also pondering new products or services that might work well for London 2020… watch this space.

With the LSE, who run the popular Democratic Dashboard site, which makes good use of the candidates and polling location data, we discussed how our data might be better archived (one for the The British Library of Political and Economic Science, also known as LSE Library, perhaps) and our shared aspirations for more and better data (including good old election leaflets). There’s the possibility that we could work together on a bid for research council funding, which has always seemed logical to us, since lots of academics use the data we produce. (If that’s you and you’d be interested in some kind of joint bid, let us know!)

🖐 Do something for democracy! 🖐

Next Thursday is a SuperThursday with 12 by-elections! And we need your help to get the candidate data together.

Check out the list of by-elections here (you might need to scroll down a bit). As you go through to each ward you’ll see for some of them we have no candidates. If that’s the case, then we need your help to add them! Hit ‘Add candidates’ and on the next page, hit ‘Add candidates from nomination paper in XYZ ward’. The nomination papers have already been tracked down by other volunteers (thank you!) so all you need to do is enter the names. And then you’ve saved democracy — congrats!

For some wards, you’ll see that the names have already been entered. Then you can help by googling for any additional information you can find to populate the individual candidates’s social media fields, the ‘statement to voters’ and so on.

We’re also on the lookout for results data from yesterday’s elections. Kingsmead in Bath has been done, but we’re looking for results for Candlewick ward and Cheap ward in the City of London, Curborough in Lichfield, and Shifnal South and Cosford in Shropshire.

Something not clear? Something getting in your way? We love to hear from folks new to crowdsourcing — or anyone looking to get started again. Ask us anything in our Slack #candidates channel.

There’s a lot of heavy lifting going on in the background on election boundaries (a ceaseless cause of fun) and some servery funtimes too — to ensure everything continues to work more smoothly, the datasets all talk to each other and nothing catches fire.