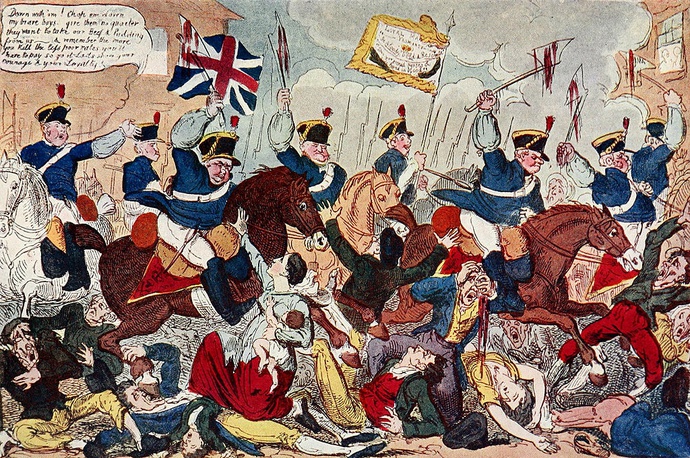 “Down with ‘em! Chop em down my brave boys…” The Massacre of Peterloo or Britons Strike Home, by George Cruikshank

Some big democra-news this week.

First, the artist Jeremy Deller — who did the amazing We’re Here Because We’re Here [and not Grayson Perry as, um, someone might have suggested in an earlier edition of this blog post], unveiled the design for the Peterloo massacre memorial in Manchester. The plan is for it to be ready for the 200th anniversary of the killing or wounding of hundreds of supporters of democracy. Take a look at the designs here (or at Manchester Central Library if you can get there before Sunday). Be sure to complete the survey and let the organisers know what you think of it!

(Meanwhile, Mike Leigh’s new film about the massacre, in case you’ve missed the not insignificant marketing, opens in cinemas today.)

Second, The Electoral Commission announced that Claire Bassett, their Chief Executive, will be moving to a new role in the new year. This presumably means the commission will be recruiting. And so, with tongue only slightly in cheek, we thought we could help them out by crowdsourcing the job description! Who do we think would be ideal at this job? What kind of skills and experience is a new chief exec going to need, at an important time for the institution? Let us know in the comments!

6 Nov: TICTeC Local happens in Manchester. Following the successful The Impacts of Civic TEchnology Conferences that have been running for a few years, mySociety are now applying the same to civic tech at the local or municipal scale. Check out the agenda here.

12 Nov: Le Sommet des GovTech is perhaps mainly for people looking to sell stuff. And you may have to define ‘GovTech’ first. But there are loads of interesting speakers, there’s a track for something called ‘CivTech’, which may or may not be the same thing as ‘civic tech’ which is a term we use to describe ourselves sometimes. It’s very confusing. But it’s in Paris! Allez! Tout de suite!

19-21 Nov: The World Forum for Democracy takes place in Strasbourg. This year’s subject is gender equality and women’s rights. There is a vast amount of programming, lots of it is livestreamed; slightly overwhelming information here.

21 Nov: Nicely related to the above, it’s #AskHerToStand Day! This celebrates 100 years since the Qualification of Women Act, which meant that women could stand for parliament. Our friends at 50:50 Parliament are inviting you, via you inviting your MP to invite you, to a day of activities to close the gender gap in parliament by encouraging and inspiring women to stand.

15-16 Feb: Okay this one’s not in November, it’s not until February, but still… It’s NotWestminster 2019! The local democracy festival returns for a triumphant fourth (fifth?) year in Huddersfield. Snap up some free early bird tickets now.

At Democracy Club towers, there’s much being done to prep for May 2019 and beyond. (We don’t have any towers.)

First, Sym has been cracking on with rebuilding the candidates crowdsourcer — and as a dedicated blog reader, you get a first glimpse of what a new crowdsourcing page might look like! 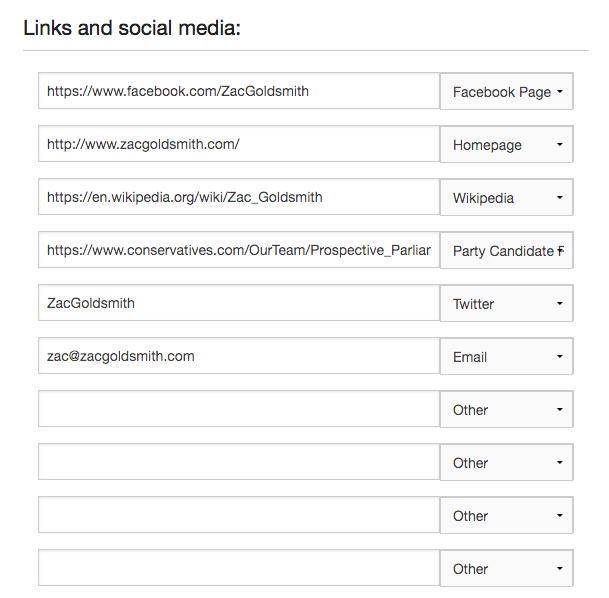 Some of the menus on the right-hand side will work automatically, once they spot an obvious domain, but users can manually choose the rest.

Does this look good? Terrible? Can you see any obvious advantages or disadvantages of this — or have any questions? We’re keen to hear from you in Slack, or the comments below, or via email, or pigeon…

Second, Chris has been working on what we do when an election is cancelled. Since we now cover so many elections, it’s not totally uncommon for them to be cancelled due to, e.g., the death of a candidate. Currently we deal with this by deleting the election from the system and pretending it never existed, which might be confusing for users, especially if everyone else is having an election. Chris’ work means we’ll soon be able to explain what’s going on and tee people up to be ready for the postponed election.

Third, we’ve been shouting about the new roles with Democracy Club! If you know any great people looking for an ongoing part-time generalist/admin role, or a full-time generalist role from Feb-May next year, please encourage them to apply! We’re also keen to hear from anyone else who’s interested in bringing their skills and experience to Democracy Club in whatever role they think would help in future.

We’re sprint-planning on Tuesday, so take a look at the Trello board and shout if you think we should be prioritising a particular card — or we’ve completely missed something.