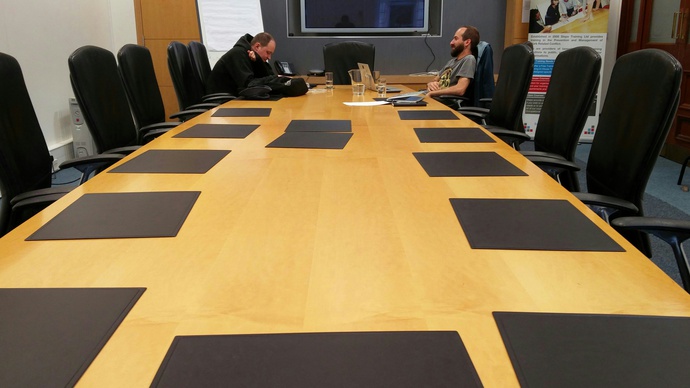 Welcome to this all-new weeknotes blog. Apart from the design and content and copywriting style and author and emojis. Okay it’s the same, but it’s on Thursdays now.

In today’s Thursdayblog, we look at the things we said we’d do in 2018/2019 and see whether we actually did them. And some other stuff.

Sym, Joe and Chris met in the wet Welsh capital on Tuesday. We were not, as you may have guessed, there for Cardiff Singer of the World. Singing’s great and all, but it’s better to review the last 12 months and plot the year ahead.

Below, there’s some reminders of what the outcomes and outputs of the 19/20 election year were meant to be and how we got on.

First, we had set some big societal change outcomes. Things like ‘civic expectations of access to information about elections are met’ and ‘sustainable increase in turnout at elections’ — these are the kind of big sweaty overarching goals that we contribute to, but which would be tricky to measure, let alone attribute our activity to. So no comment on these, other than that they’re likely to stay the same for the year ahead.

Second, we set some more measurable ‘intermediate’ outcomes. Alongside these were lined up the outputs: the work we were going to do to make those intermediate outcomes happen. Here’s how it went down:

In the event of a general election, help 10m people gain knowledge about election

Well, this didn’t happen. But we still did some work on to maintain planning for a general election, including listing and preparing of potential freelance hires, sources of funding. Obvs this will run into 2019/2020 too.

This didn’t happen either. Not through want to trying. You can scan back through previous weeknotes to see how we got on here. In short, we never made it. Gormenghast came to mind a bit. We’ve made some good connections, but a different approach is probably required.

Lots of technical work was done to improve the codebase of Candidates. For example, the robots that automatically grabbed many of the candidate names directly out of PDFs increased the productivity of wombles and increased the speed with which we got to 100% coverage. In terms of a more diverse womble-base, we anecdotally feel like more candidates, campaign managers and local party representatives were involved this year. This is good! We still need to review % of candidates with an email / facebook link / etc. And we still need to look at satisfaction scores from Who Can I Vote For?.

We did hit this number — at least 2m uses, but that was largely because we hit 1m+ for each of the locals and the EuroParl elections. Of the outputs we thought would get us there, we did lots of partnership work as usual (including a great partnership with In Your Area using the local candidate data), but didn’t create an ‘ElectionEverything widget’ (i.e. combined polling station info and candidate info), through over-relying on volunteer/pro-bono work. This is something we’re keen to try to do again this year.

We’ve not done the population figures, but we probably didn’t hit this target, partly due to the rural nature of the councils with elections in 2019. For the locals, 178 councils sent data — and we imported it all, but this was some way short of the number of councils actually holding elections. Not quite sure why. In a first for us, the EuroParl elections saw more councils send data than we had a chance to import. We’re thinking about what we can learn from this for (a) a snap general and (b) for the long-term (hopefully not too long) goal of getting this polling location finder sorted for everyone in the country.

One of the outputs that was supposed to lead to this 90% figure was to maintain good relations with The Electoral Commission and local authorities. We think we’ve definitely done the first, but perhaps we could be more communicative with the latter.

10,000 reminders sent for May elections; 20% survey respondents say they wouldn’t have voted without it

The vague plan here was to kickstart work on an Election Reminders service. But not a lot happened here. The chief output was meant to be a discovery process on user needs, tech requirements, funders, etc, and some of this work did get done in a piecemeal fashion. We are cautious about whether it’ll have any effect and who’ll pay for it sustainably. Need to work more on this before we dive in.

There were a lot of planned outputs to meet this outcome; you can see them in the full spreadsheet linked below. In brief, we did clarify the club’s vision and mission, we did get the board starting to be more involved and we did fundraise to keep going, though not to expand (yet). We also somehow got 20,000 on the mailing list, and probably met the 500 volunteers mark (we’ll check this). We didn’t, however, meet the individual small monthly donor target (despite our bright-coloured requests on Who and Where), nor did we sell any finder to a council. Nor did we survey the members, though some progress was made with the survey design and this would be a priority for any new ‘organiser’ hire. The board also helped us discuss whether the diversity of volunteers was in fact a problem: tl;dr — probably not in the case of data wombles, but important to consider when we’re trying to identify the next problem and next solution to work on.

Help improve other institutions working on democratic engagement in the UK

Outputs listed under this outcome were a report/event on The Electoral Commission and voter information as well as a report on ‘what good looks like for digital+democracy in the UK’. Neither of these happened, but importantly, we maintained conversations with the EC and contributed to some of their internal documents throughout the year. Also, the Constitution Unit did some of this work for us, with their Doing Democracy Better report. On the second report idea — this was possibly a bit ahead of ourselves and maybe still is… though someone should probably do it.

The output here was to produce a report, which we did in draft form here. We’ve had lots of helpful feedback — thanks again to those who took the time to read it and comment — the next step will be to turn it into some action points for us (and others) over the next year. (It’s already guiding some of the suggestions we provide to other organisations and funders.)

This was only ever a bonus outcome; the outputs were to run a discovery process on councillor data and we did this and we did it prettty well. Many blogs and scrapers were written. Since spending a week on this in October 2018, chats in this area have continued: various people and organisations have been in touch to use some of the pilot data we got together. This blogpost on the project has been read many times. We even chatted with an NGO about this very subject this morning. There’s clearly an appetite for open representatives data, and it’s not impossible to get it to happen. As always, it’s more about resourcing: making the data available in a way that’s accurate, accessible and sustainable.

For more detail on the review of last year’s goals, you can review the full spreadsheet here. And there’s meant to be an annual impact report coming soon. Maybe in July… possibly in time for our get-together (see below)!

Next week, Thursdayblog will (probably) sketch out the goals for the year ahead, on which your comments will be very welcome.

The elections keep coming! They include a rarely spotted Police & Crime Commissioner by-election — quite exciting indeed.

As always, you can help a voter out by adding links and photos to the Candidates database.

Another quick shout out for the summer get-together on 14 July. As well as wandering around the beautiful city of Bath, we might also do a bit of work on making Candidates look and feel better. What a treat! Sign up for more news on the get-together via the Eventbrite page. The sun will be shining, or your money back.

Sprint planning day was yesterday, so the Trello is full of tasks. Have a gander. Updates to follow in, er, Thursdayblog, particularly on the big goals for this year.