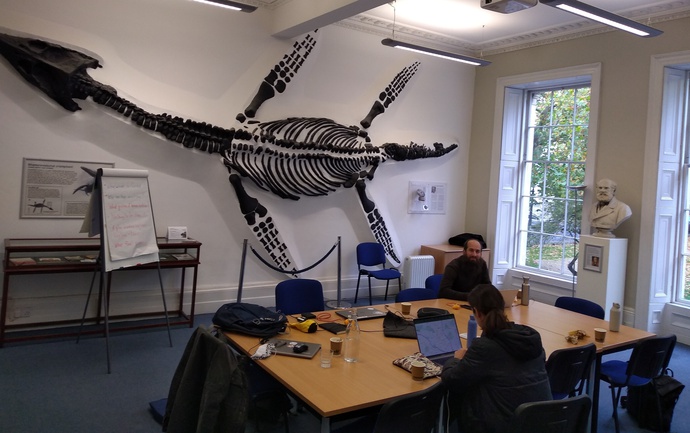 Not a bad office, all things considered.

Last week we were in Bath for the novelty of an in-person team meeting, where we were joined by board member Mevan, who is doing some fundraising work for us this month. Also present but with disappointingly little to contribute were the former mayor of Bath Sir Jerom Murch, and a plesiosaur, both permanent residents of our hosts Bath Royal Literary and Scientific Institution.

Once again Democracy Club is looking for a part-time elections assistant to work on our coverage of the May elections - the fourth time we have hired such a role. 5 May 2022 will be a UK-wide affair: the Northern Ireland Assembly, as well as councils across Scotland, Wales and England. Because it’s a quiet year in England there will be less polling station work than in recent elections, but this will be more than made up for by the candidate and political parties side of things. The last Welsh, Scottish and London local elections were in 2017, and there’s a lot to do to bring our infrastructure and voter information tools up-to-date.

Interested? You can find out more about the job and apply using this form. Applications close on 22 November.

Relatedly, we’ve started the work necessary to create the list of 2022 elections, going though council areas individually to work out which seats are up and processing any new Electoral Change Orders (that is, areas with new electoral boundaries). There are some significant local government reorganisations planned before May 2022, including new unitary authorities in Somerset, Cumbria and North Yorkshire.

Exciting times in Wales, where the Welsh Government has announced a pilot for flexible voting pilot schemes in four council areas, allowing voters to cast a ballot at a central location in the week before the official polling day.

These changes will obviously require a little work at our end to make it clear to users of our polling station finder, though fortunately we don’t anticipate this posing a serious challenge to our existing model!

💾 Deployment changes to Who Can I Vote For 💾

The deployment process for WhoCanIVoteFor.co.uk has been extensively updated so that deployments are now automated and can be triggered simply by updating the GitHub repository. Behind the scenes this has involved using a number of new AWS services, concepts and other tooling, as well as refactoring our application code to update the data importers from our candidates database. We will have a full in-detail blog post about the changes and what it means for our other sites coming soon. For now you might want to revisit our last blog post about the technical challenges faced with deployments.

The tail-end of 2021 is turning out to be a very busy time in the land of elections, with a substantial number of by-elections for councillors, MPs and PCCs. At the same time, our polling station finder is now so familiar to council electoral services teams that some are starting to provide us with data for these unscheduled polls, without any prompting on our part.

After discussion with the Electoral Commission, we’re pleased to be able to offer the polling station finder as standard for all unscheduled higher-tier elections (that is, everything above councillor). We’ve already provided it for the Croydon referendum and Wiltshire PCC election earlier this year, and will be proactively contacting all councils with similar polls from now on. We’ll also be monitoring user numbers and hope to be in a position to judge overall demand early next year.

We’re working on making sure that the code we use to extract candidate data from Statements of persons Nominated is robust enough to handle the many edge cases that were discovered in 2021 - to hopefully increase the number of SOPNs that can be uploaded and parsed automatically. Ideally this will enable us to get all the candidate details in record time, but we’ll still need volunteers to double check everything. Want to help out? SoPN days next year will be 30 March (Scotland), 6 April (England and Wales) and 8 April (Northern Ireland).

🎂A small note on birthdays🎂

As part of wider work on our candidate model we’re removing birth day and month from the candidates database - most candidates don’t have a birthday at all, and considering we don’t display this info on WhoCanIVoteFor we have decided to reduce this level of personal information.

Phew! that’s enough for this blog. We have some more focused blogs coming up before the end of the year to profile some of the work we’ve been doing in more depth. Watch this space!