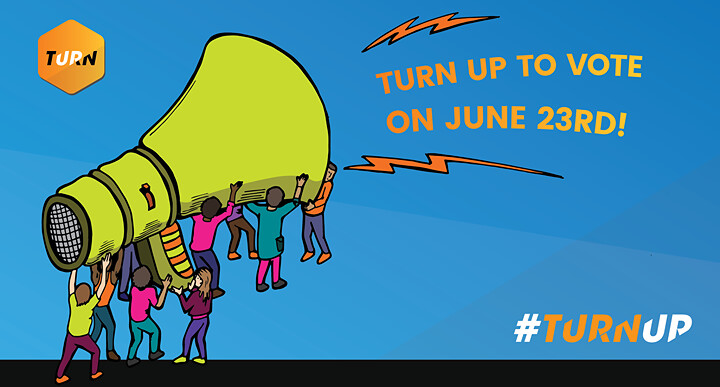 Graphic used to encourage turnout at the EU Referendum

In the last couple of days we’ve been blogging our research on elections, voting and young people. In the first post, we asked ‘who are we talking about’ and ‘what’s stopping people voting’; in the second post, we asked ‘what attempts have been made to boost registration’ and ‘what works’.

Today’s post looks at what we can take from that knowledge to move forward and try new things. The research project was particularly targeted at informing some of the digital prototyping Democracy Club did for the EU Referendum, but this information is still relevant.

There are three main groups that are counted in the 18-24 bracket:

The third group is such a broad category because nobody’s studied it enough to zoom in further. The first two groups receive the bulk of the attention and registration programmes, so it makes sense to focus on young people out of education where possible.

Bite the Ballot raised the point of using the benefits of voting as lures to improve voter registration, e.g. it improves your credit rating, makes you eligible to sit on a jury and improve representation for young people in criminal justice. This underlines the importance of connecting registering to vote and voting with real life. The audience in this instance does not view voting as a worthy goal in and of itself.

Tone of voice, message and style

Several respondents mentioned that when the referendum came up in focus groups, young people didn’t know its date. Young people also reacted poorly to official government communications that spoke in grand narratives about “the average person” being better or worse off in or out of the EU.

If a prototype is made that is communicating new information, it should use available data to make that message as tailored to individual circumstances as possible. The circumstances of a single parent in Hornsey are not the same as a house-share in Deptford, nor an apprentice’s to someone on a graduate scheme. The evidence we have so far indicates that generalised messages are being ignored. It is also important to remember that the voices and opinions of peers carry more weight in these circumstances than official broadcast messages.

Young people are often unfairly maligned as uninterested in politics. Research and anecdote suggest that this is almost entirely unfounded and that instead, young people are presented with a world where they are written off as feckless, whilst simultaneously being asked to make choices that, as far as they can tell, are completely divorced from their everyday lives, but are also imbued with huge national importance.

Whatever the prototype, it needs to address the problems of:

Democracy Club tried to take these lessons on board when we created a digital prototype to boost registration of young Londoners. You can read about that here.

And we’re not stopping there. We’ve applied to Unbound Philanthropy to continue to work on some of these themes — and build upon what we know. If we succeed in the application, we’re going to be working with partners like Bite The Ballot and Newspeak House to take another look at every aspect of voter registration and turnout among underrepresented groups.

If you’d like to join in that process, please get in touch! We’d love for you to join us at a Newspeak House gathering early in the new year.