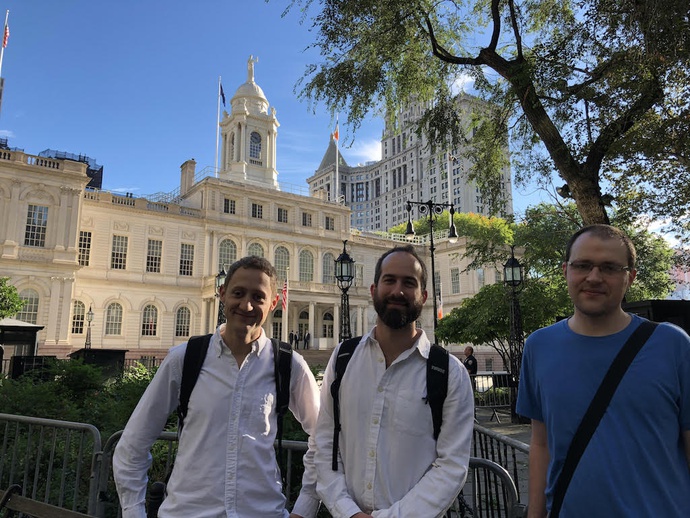 This was about as close as they’d let us go to New York’s City Hall.

In this week’s blog, we advertise an advert, reflect further on our NY tour, we’re in Cardiff for, er, jelly, and it’s Sprint #7!

We’re looking for an extra pair of London-based hands (they’re like normal hands, but a bit grubbier) for the local elections next year. Obviously there aren’t only elections in London, but it’s likely that they’ll get the attention, and there are 8.5m of those Londoners. There are lots of meetings to go to, lots of hustle to do and lots of candidate information to glean.

The position is open to all levels of experience. We can even help with accommodation — we hope that we can appeal to people who don’t already live in London.

Please help us out by sharing the advert! Take a second to think of anyone you know who might be looking to get into civic tech or democracy work. There’s a tweet you can RT, if that’s your bag.

Can’t believe we missed this pun before. If de Tocqueville were alive, we’d ask him to write this blog. Mais il est mort. Alors, Joe is writing this week — and this blog is unlikely to become a classic of political studies literature. Hey ho.

We thought it worth blogging some other bits of our NYC trip, before we forgot them. Last week Chris wrote about Get To The Polls, the US equivalent of Where Do I Vote?, and the bits we might be able to learn from each other. This week, we wanted to mention how Democracy Works (our generous hosts in Brooklyn) makes its money and how NYC seems better about shouting about local democracy than London.

It was striking that Democracy Works is a much bigger operation than Democracy Club — more than the population difference alone would suggest. Why so? Well, perhaps partly because there’s just more money in politics — and some of that is philanthropic funding for civic purposes. The US philanthropic space is already much bigger than the UK’s, partly because of a big difference in perceptions of the roles of public and private institutions.

The difference might also be related to the fact that Democracy Works also sells a product — TurboVote — to organisations trying to help people register to vote and turnout. TurboVote’s typical customer is a university, which, in the USA, have a vague statutory duty — plus perhaps a moral or educational duty — to aid their students to register to vote. TurboVote helps them do that by whipping a range of different online and offline state-based processes into one simple digital service for students, complete with handy election reminders. And the universities will pay for this.

This obviously sparked ideas. It’s harder here because the Government Digital Service has already mostly solved the digital registration thing. But we still have lots of vital voter information to offer. So if you know anyone who works in student services — or any student unions (these are trickier, as they’re quite transitory) — please get in touch! Now’s the time to be thinking about those big student populations in the cities with all-out elections next May.

Not content with raising cash from universities, Democracy Works is also cracking the business nut, working with a range of well-known brands to register their staff to vote. Democracy Club has thought about this a lot, but when we’ve raised it with organisations we thought might be quite pro-democracy — like the National Trust — they’ve immediately shut us down with ‘oh that sounds like politics, we couldn’t possibly…’ response. Well, yeah. But if a not-exactly-neutral-on-lots-of-big-political-issues giant membership organisation gets nervous, then who knows what happens when we go talk to Sainsbury’s.

However, there are bound to be some supportive companies out there, who understand that supporting the democratic process is not the same as taking a party position on something. And they, crazy as it seems, might understand that staff engagement in democracy could be a good thing for employee welfare. Or that we all have a role to play in helping people fulfil their civic duty. In short, we’re inspired to try harder with companies with lots of staff or big lists of customers that they regularly write to. We’ll let you know how it goes.

To paraphrase Homer Simpson, they have the internet on lampposts now! These massive digital advertising screens (with an iPad built into the side to get more information) are dotted around NY, providing WiFi and access to information about the city, including an invitation to the next local council meeting. Imagine! Massive public invites to join council meetings — right where people will see them. Exhibit 1: the photo below, which missed the precise advert, but you get the idea.

And talking of ‘where people will see them’, the city was also making an impressive effort to let people know about upcoming local elections! Exhibit 2: this slightly defaced subway advert below.

In this vein, we recently emailed Transport for London (TfL) about a partnership, specifically around polling stations on journey planner, but they declined, citing a lack of resources. We’re sure TfL wouldn’t want to be outdone by New York’s Metropolitan Transport Authority, eh TfL? If you know who else we should be speaking to at TfL, let us know!

We did a quick roundup of all our NY meetings here, but following that post, we snuck in one last meeting, with Google. We headed to their offices in the former Port Authority of New York building, which now just has the big Google logo plonked over the old signage. (There’s a metaphor here, somewhere.)

It was a fascinating discussion, which will hopefully lead to further conversations with their tech and data leads for civic engagement — our goal being to get them to deliver more data to citizens via Google Search again. Google’s efforts at GE2017 were a bit lacking in, er, efforts — they failed to deliver any pre-election information tools (as they had done in 2015) — so we need to push now to help them be prepared for any eventual general election.

Back in the UK, we were in Cardiff this week. It was very similar to New York. The incredible drizzle. The grandeur of Cardiff Central station.

We were in Cardiff for open data jelly. A jelly, apparently, is a thing where people from different organisations or none get together to work and go for lunch. And we met some nice people, including our old pals at Satori Lab. Also, Cardiff is handy for our distributed team, which happens to be distributed with quite a western bias. If you’re within a train’s reach of Cardiff, think about joining us at the next one. And thanks to Indycube for hosting.

We’re into Sprint 7 of our work planning. You can see what we’re up to over the two-week period, even if it’s just to check whether we’re still illustrating the sprint number with an image of the same number of cats). Terrifyingly, we’re almost halfway through our year. We’ll try to write a halfway review soon.

We’ll be at, er, Windsor Castle, for an event on democratic education. There’s seems to be a bit of a boost in the attention given to, or noise around, citizenship or civic education, whatever you want to call it, happening in the UK at the moment. Either that or we’re experiencing some confirmation bias. The meeting or conference we’re heading to will bring together a range of organisations working on democracy to help kickstart a new push for better civic education in the UK. Exciting.

We’re also hard at work on improving our open election data model, continuing improvements to the ways we process polling location information, doing some annual reporting to Companies House (which you can’t do digitally, of course 👏) and starting on some of that additional Democracy Works-inspired outreach to universities and companies.

P.S. We got all this way and didn’t make any Hallowe’en puns about ghostal votes or anything. 👻